On the southern tip of Sinai, coastline paradox of Red Sea, that has created uproar in Egypt Tourism. With so many jaw-dropping sights and bone melting adventures tourist flock all year round. Find the best Information About Sharm El Sheikh here.

Operational base for fishermen, became prominent when Israelis built Ofira that overlooked some coastal areas of Sharm El Sheikh. After that, tourist began to flock and once a fishing village was transformed into a major port and metropolitan area on the coast of Red Sea.

The city has played a major role in peace treaties and conferences. But Egypt tourism has focused on the attractions and adventures of Sharm El Sheikh. 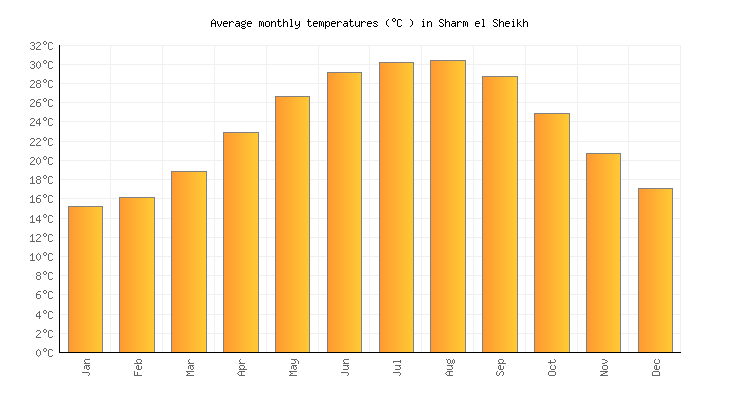 Sharm El-Sheikh is generally warm and dry all year round. The water temperature is always warm, although cold snaps may affect the region occasionally each winter. In winter the stay can be enjoyable, and the days are quite short.

Summer: (May – September) Average temperatures reach 37°C during day and lows of 28°C at night. These months can be humid, but Red Sea winds manage it.

Winter: (December – February) Average temperatures of winters are 19°C in December, 18°C in January and 19°C by February. The sea is at its coolest in February, when temperatures drop down to 22°C and in December temperatures reach 24°C.  However rainfall may occur during this time.

Best Time for diving: Summer (May and June)

To know in details about these sites, see Sharm El Sheikh Top Attractions.

Egypt tourism has brought the city into focus with several exciting adventures which you can see in details in Sharm El Sheikh Tours, Travel & Activities.

Sharm El Sheikh is the best of Sinai but it is not the only attraction. Explore Red Sea at Sinai’s El Shiekh with NILE HOLIDAY. Let us show you the best of Sinai without worrying and stressing with our Sharm El Sheikh City Breaks. Our guides are experienced and know how to give you a holiday that will be etched to your heart forever. So pack your holiday bags today and experience Red Sea at its best…