The Mediterranean port city of Egypt is a breath of fresh air from the heat and sun of Egypt. Being a port city it is the most awaited vacation spot globally and in Egypt during summer. Find the best Information About Alexandria today

Alexandria was founded by Alexander the Great as a bridge between Greece and Egypt in 331 BC. After its foundation, Alexandria became the seat of the Ptolemaic Kingdom and quickly grew to be one of the greatest cities of the Hellenistic world.

But after Rome gained control of Egypt in 30 BC with Cleopatra VII, did Alexandria grew its head in size and wealth which during the Islamic era in Egypt shrank to a fishing village.

The French army of Napoleon in 1798 and then by British invasion of Egypt, brought Alexandria back in focus again.

But truly the city grew under the industrialization program of Mohammad Ali, the viceroy of Egypt in the 19th century. Currently, a leading port city where tourism has made a major impact not only on the world but in Egypt too is the industrial heart of Egypt. And is famous for refined petroleum, asphalt, cotton textiles, processed food, paper, plastics and styrofoam. 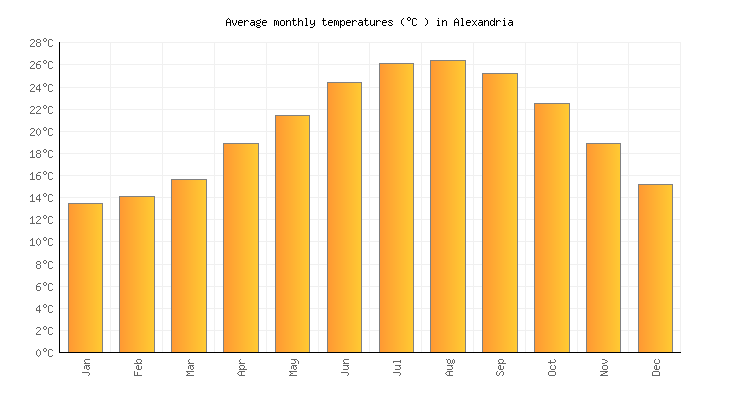 With a Mediterranean climate that offers warm humid summers and mild rainy winters, Alexandria is a beacon of life all year round. With low chance of rain, the area is more temperate than most and has pleasant weather compared to other tourist destinations worldwide.

Ideal Weather: October 22nd to May 20th based on average temperature…

Summer: Temperature ranging from 31°C (88°F). While days are humid, evenings are to die for. Due to which is the peak season for tourists.

Winter: Temperature ranging from 12°C (53°F). Days are cold with occasional rain and hail. Even though pleasant weather, sea water is not recommended for swimming.

Busiest Time: Summer (June- August), since Egyptians flock down to escape the searing heat of Egypt.

To know in details about these sites, see Alexandria Top Attractions.

Due to one of the best tourist magnet, Egypt Tourism has experimented a lot here and is awarded accordingly. For details, see Alexandria Tours, Travel & Activities.

NILE HOLIDAY excels in giving the best of Alexandria, whether you want to enjoy the sites or educate yourself with mysteries and facts surrounding Alexandria. Get the best of both Roman and Hellenistic Era of Egypt and a little bit of Islam, French and British along the way on our Alexandria Tours…